There is no question that Aishwarya Ria is one of the most popular actresses in the world thanks to her domination of “Bollywood”, the Indian film industry. Her natural, radiant beauty is stunning to behold from her wide, glowing eyes to her well maintained physique. However, there have been rumors about Aishwarya Ria undergoing plastic surgery to ward off the effects of age, particularly with work performed on her lips and a nose job.

Aishwarya Ria burst out on the international scene when she won the 1994 Miss World Pageant. Since then, she has starred in over 40 Bollywood movies which helped seal her status as one of the most beautiful actresses in the world. Her natural beauty, particularly her stunning eyes, have been the primary source for the attention she has received which is why undergoing plastic surgery would be devastating to her fan base.

Are the rumors true about Aishwarya Ria and do the alleged before and after plastic surgery photos proof of such work being done. Or, has the changes she has undergone the combination of age and makeup?

A close second to Aishwarya’s eyes are her beautiful lips which may have undergone collagen injections, much to the dismay of her fanbase.

Since the shape of the lips changes relatively little from the teens years to adulthood, it’s clear that Aishwarya’ lips have undergone some type of work. She has opted for a subtler approach, but the fullness and pouty quality of her lips are noticeable.

There is no question that Aishwarya’s cheeks have become more prominent over the years which has caused many rumors about having implants. 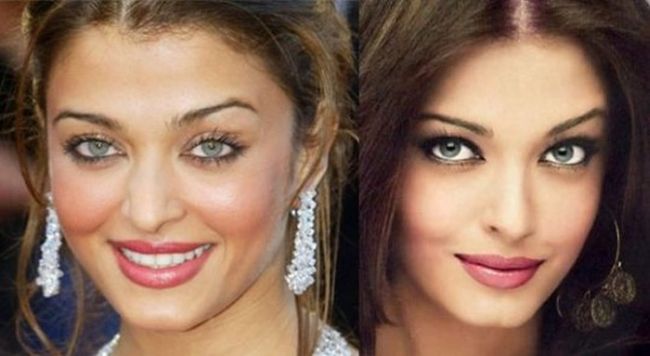 Aishwarya Rai is denying that she has cheek implants.

However, she has been quite adamant in denying that she has had such a procedure performed. While on the surface it certainly looks like something has happened, it is also true that the loss of baby fat, change in diet, and the natural aging process can make a person’s cheeks more prominent.

In this case, Aishwarya gets the benefit of the doubt as her more prominent cheeks appear to come from the aging process and highlighted by makeup.

Called rhinoplasty, Aishwarya has denied rumors that she has undergone a nose job, attributing the difference seen today compared to her time as Miss World in 1994 as due to new make up applications. While it is true that the differences are subtle, it does appear that the bridge of her nose is narrower, the base thinner, and the tip is somewhat sharper.

It appears that Aishwarya Rai has undergone a successful nose job.

While makeup can provide some of the sharpness, it cannot account for all the changes that has happened to her nose over time. So, it appears that she has undergone a successful nose job that has managed to enhance her incredible beauty.

How news of Aishwarya Ria’s plastic surgery will be fully received is not known, but what is true is that the before and after plastic surgery photos demonstrate that she has undergone collagen injections on her lips, a nose job, and perhaps some other work as well.

Next Post: Chloe Lattanzi – All Her Plastic Surgeries – Breast Augmentation and More